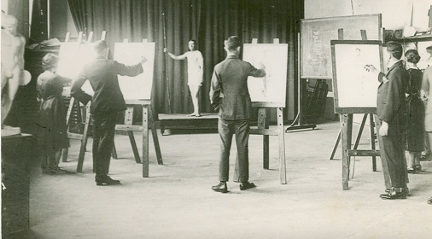 An interesting article on craft by John Watkiss, with useful illustrations and diagrams. Click the link below to read the article. Let us know what you think!

You miss a lot of wonderful as well as historic art if the nude is denounced. (B. J. Adams)

Open this link to read:

Nude women in art- Are they necessary?

Nudity in Art: A VIRTUE OR VICE?

This is an article by Brian K. Yoder for the online site Art Renewal Center:

Nudity in Art: A Virtue or Vice?

“What spirit is so empty and blind, that it cannot recognize the fact that the foot is more noble than the shoe, and skin more beautiful that the garment with which it is clothed?” —Michelangelo

Some people feel that the nude form is something that should be hidden away both in art and the artist’s classroom. Although this may seem at first like a mere annoyance, such people frequently attempt to stop others from viewing or learning from the human form, thereby infringing on their rights to create and consume art as they wish.

I believe that one source of this sort of comment arises from a lack of understanding of how the best art is taught and created. All of the recommended art training programs include nude figure drawing in the curriculum, and thus it has always been, back to the days of the ancient Greeks. In fact, it would be virtually impossible to teach someone how to draw accurate human anatomy without this essential tool. Even to depict a clothed figure one needs to fully understand the mechanics of what is underneath. Drawing the nude figure is the only way to accomplish this, as is the practice of learning how to draw the bones and muscles beneath the skin.

Educational issues aside, nude figures also offer important expressive tools to artists. They can show human beings in ways that are uniquely valuable. For one thing, expressions of nudes are the extreme opposite of expressions of figures wearing trench coats, hats, and dark sunglasses. They also allow the artist to show people outside of a historical context if he/she wishes to do so. Put any kind of clothing on a person in a painting or a sculpture and you tie them down to a time when that kind of clothing was common or popular and apart from times when it wasn’t.

That said, at times the figures need to wear clothing due to the nature of what is being portrayed, yet the artist may still wish the message to be universal to every person of all times. One way of doing this has been to dress the figures in a sheet or simple cloth which is often called classical garb which drapes the figures and feels like it could be taking place in the past present or future. I like to call this placing the figures in the “ancient distant future.”

Using nudity the artist can show human beings in a way that focuses the attention on the figure and not irrelevant matters like how their shirts are buttoned, how their skirts are being draped, and whether they are wearing the most stylish kind of hat. The ability of the artist to focus attention on the important aspects of what is going on and to remove distractions from this subject of focus is a common reason for the choice of nude figures as well.

Lastly, the human body can be a beautiful thing to contemplate and this can be a useful artistic tool in and of itself, just as flowers, sunsets, and mountains are similarly useful tools in the artist’s toolkit. And if the point of art is primarily to express ideas about the nature of humanity, our role in the world, then it would be natural to expect that the unadorned human form would be among the most powerful of those expressive tools and indeed it is.

The reasons for anti-nudity vary widely but they contain some common themes. Some of these are here presented to stimulate further discussion. Please feel free to respond with your reactions, positive or negative, whatever your point of view.

What are the complaints?